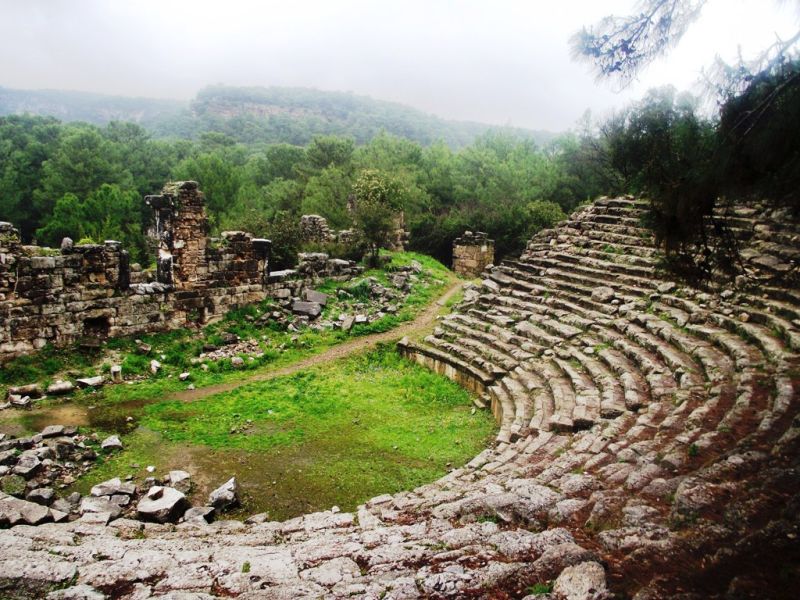 Travellers’ Choice Awards. Find out what the best Ancient Cities in Turkey are as awarded by real travellers.

Anatolia-the heartland of Modern Turkey is that region lying to the south of the Black Sea, to the east of the Aegean Sea, north of the eastern Mediterranean Sea and, inland, the Fertile Crescent, and west of the Caucasus-Azerbaijani districts. A very roughly hewn upland region for the most part, it has been both a home and a highway for a bewildering variety of peoples for as long as there have been humans.

This list (Ancient (Turkish) Cities) will give a brief overview of Anatolian chronology from the earliest times to the present. It does not pretend to be complete in any sense; Anatolia is a very large area, and though there have been times, like the present, when it has been completely unified, there have also been many times when fragmented local nations were the rule. In such instances, I have either listed the most significant among local conditions, or simply indicated a general period of local conditions. Even during times of union with large Empires, very often outlying districts were partially or completely autonomous; read Xenophon’s Persian Expedition for an insight into conditions obtaining in the Anatolian highlands of the Persian Empire, during the winter of 401/400 BCE.

Alacahoyuk; Situated in Alaca town in the city of Çorum, Alacahöyük predominantly shows the Hittite influence during the Bronze Age, although ruins belonging to four different cultural phases can also be seen.

Aphrodisias; With a history dating back to 5000 BC, the ancient city of Aphrodisias was established during the Greek and Roman times and is one of the most valuable settlements that have survived to the present day.

Asclepeion Ancient City in Pergamon; An ancient medical center, the Asclepeion in Izmir province, is built nearby the springs that are believed to be curative.

Assos; Its history dating back to the 6th century BC, Assos is built on a dormant volcano of andesite rock, in the modern city of Canakkale.

Cappadocia-Historical Places; Cappadocia history and historical places of Cappadocia. Get facts, photos, and travel tips for Göreme National Park and the Rock Sites of Cappadocia, a World Heritage site in Turkey.

Çatalhöyük; Founded 9 thousand years ago in the Cumra town of Konya, Çatalhöyük is inscribed on the UNESCO World Heritage List.

Situated in the town of Selcuk in Izmir province, Ephesus is one of the twelve cities of Ionia.

Halicarnassus; Named Halicarnassus in the ancient times and one of the most beautiful districts of Muğla province

Harput; Located within the province of Elazığ today, Harput has a history dating back to 2000 BC.

Kalamaki; Kalamaki is situated in the town of Kas in Antalya province, also known as Kalkan, is impressive for its closeness to the ancient cities in the region and for its natural beauty.

Knidos; Among the major settlements of the ancient times, Knidos is located at the edge of the Datça Peninsula which is a district of Muğla famous for its natural wonders.

Laodikea; The ancient city of Laodicea, in Denizli province, used to be one of the most well-known and important Anatolian city in the 1st century BC.

Letoon; On the Fethiye-Kas highway, Letoon is originally founded in the name of Leto, mother to the Olympian divinities Apollo and Artemis.

Lotape; Located in Antalya province among the Mediterranean cities with the warmest climate, the ancient city of Iotape was named after the wife of king Antiochus of Commagene.

Miletus; Situated near to Soke, a town in Aydin province, Miletus earned its independence in the year 38 BC with the help of Roman emperors.

Myra; An ancient Lycian city, Myra is situated in the fertile lands of the town of Kale in Antalya.

Pamukkale (Hierapolis); Located close by the natural wonder of Pamukkale, the ancient city of Hierapolis was founded in 190 BC.

Patara; Located between Fethiye and Kalkan, the ancient city of Patara is known as the birth place of the Greek sun god Apollo.

Pergamon; is founded in the county of Bergama (Izmir), where the Aegean and Anatolia regions come together. P

Perge; Situated in the town of Aksu in Antalya province, Perge was founded during the Bronze Age.

Phaselis; Nestled amidst the lush green nature in Antalya province, the ancient city of Phaselis was founded in the 7th century BC. .

Priene; An ancient Ionian city, Priene is located within the borders of Aydin province.

Ruins of Ani; The ancient citadel of Ruins of Ani is situated on the barren plains above the Arpaçay Valley which separates Turkey and Armenia.

Sagalassos; Close to Aglasun, a town of Burdur province characterized by its natural beauties, Sagalassos is known to be the first of the Pisidian cities.

Sardis; The capital of the kingdom of Lydia, Sardis is situated in the Salihli town of Manisa province.

Smyrna; is the ancient name of Izmir which is not only one of the earliest settlements but also one of the most beautiful cities of the Aegean Region.

Stratonikeia; The ancient city of Stratonikeia, situated near the town of Yatağan in Aydin province, was a member state of the Khrysaor Union and founded in the 3rd century BC.

Termessos; Built on a natural platform on top of the Mount Güllük (Solymos), Termessos is one of the best preserved ancient cities in Anatolia.

The antique city of Ani

The antique city of Ani; in Kars province is another highly recommended ancient site worth the time to visit.

Troy; One of the richest cities of the ancient times and among the worldwide popular tourist attractions, Troy is located in the heart of nature in Çanakkale province.

Xanthos; Located around Fethiye, the ancient city of Xanthos once functioned as a capital of the Lycian League.

Zeugma City; Founded approximately in 300 BC by the generals under Alexander the Great, Zeugma is situated in the Nizip town of Gaziantep.

ANCIENT CITIES IN TURKEY
1 of 10

If you are interested in the history of the place where you spend your holiday in Turkey, we suggest you visit the ancient cities which are the open air museums of Turkey.

Throughout its long history spanning over 10,000 years Anatolia, the land that is now Turkey has been the birthplace of many great civilisations and empires all of which have left their mark in unique ways.

Lose yourself in the ancient cities and sites of Turkey, which includes once in a lifetime chance to visit the cities of Ephesus, Aspendos, Perge, Hierapolis, Aphrodisias, Gobeklitepe, Hattusas, Catalhoyuk, Assos, Troy, Ani, Demre (Myra) and Side as well as the Aizanoi Ancient City.

There are lots of ancient cities and ancient ruins in Turkey, for the archeology lovers and fans. You can see the heritage from neolithic period when people start farming to classical and middle ages’ magnificent cities.

From the Neolithic site of Catalhoyuk to well preserved ancient Greek and Roman ruins, to Byzantine churches and Ottoman mosques, the layers of history in Turkey has myriad architectural, archaeological and religious legacy.

View our Tips & Articles. and see the stories

10 Cities you must visit once in your lifetime

ABOUT US
Plan your holiday in Turkey with free guides and videos. Learn about Istanbul, Ephesus, Cappadocia, Antalya, Turquoise Coast, where to stay, walking, fishing and more.
Contact us: [email protected]
FOLLOW US
© 2023 All Rights Reserved. Design and Web Development Studio
MORE STORIES
DESTINATIONS