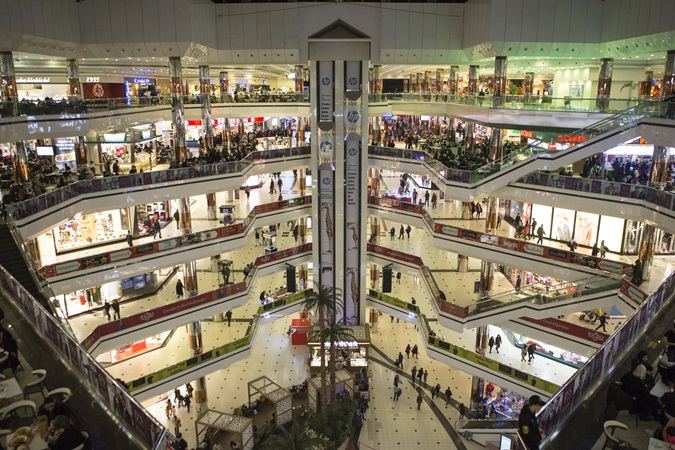 Shopping centers can be considered as a very young concept in Turkey, since the history goes back only to the late 80s. However, once the malls appeared on the shopping scene, the Turks embraced them. Almost every neighborhood has at least one. Following you can find some of the biggest and fanciest shopping centers in Istanbul. They are mostly close to the Taksim area, thus very easy to reach by bus, subway, or taxi. Oh yes, as a rule of thumb, we can say that they are open between 10 am and 10 pm.

Akmerkez is located in Etiler, a neighborhood of the Beşiktaş district and one of the favorite areas among Istanbul’s elite. It is also close to the business quarters of Levent and Maslak.

This four-storey mall with almost 250 stores covers an area of 180.000 sq meters. It can be easily reached by tourists and locals alike thanks to their free transportation service from and to close range neighborhoods and hotels. It opened its doors in December 1993 and is open between 10 am and 10 pm every day.

Located in the Istinye neighborhood of the Sarıyer district, Istinye Park has brought a new dimension to Istanbul’s shopping concept. Spread out over an area of 242.000 sqm, the shopping center offers a variety of outdoor and glass roofed indoor sections such as a green central park, Fashion District, street side shopping, a kids’ entertainment center of 1.500 sqm, Hillside Sports and Leisure Club, The Bazaar — an area inspired by historical Turkish architecture — and 12 movie halls, one of which being IMAX 3D.

Green, eco-friendly, humane and eye for details is how you can best describe Istinye Park. There are three waste collecting centers and a waste oil collector. Wheelchairs, lockers to leave your valuables, baby buggies free of charge and immediate tax refund are only some of the thoughtful services provided.

Picture of Kanyon Shopping Center in Istanbul, Turkey.
Kanyon. © Kanyon
As a four-storey shopping center located in the financial district of Levent, the 37.500 sqm shopping center has 160 stores among which Turkey’s and the world’s most selected brands, gourmet restaurants, cafes, a health and sports club and movie halls.

Kanyon was awarded with the 2006 Cityscape Architectural Review Award in the “Commercial Built” category.

Picture of City’s Shopping Center in Istanbul, Turkey.
City’s. © City’s
In case you enjoy being in the center of fashion, let alone shopping, you have got to see City’s in Nişantaşı, part of the Şişli district and very close to Taksim. City’s is a shopping center which blends in with the historical texture of the area.

City’s concept is described as a Life Style Center. It sure deserves this stylish title, considering the variety of the stores, cafes, restaurants and the vital 24 hour six-storey parking service it provides to the populous area.

Picture of Nişantaşı, an upmarket shopping district in Istanbul, Turkey.
Nişantaşı.
This is not a shopping center, but a district within walking distance of Taksim known for committed shoppers in search of sophistication.

In the mid 19th century, Sultan Abdülmecid I initiated the decent living in Nişantaşı. Today, Nişantaşı has the third largest community of foreign residents in Istanbul. It is a fashionable shopping and an upper-scale residential area. The locals of the district are known as dignified, well-mannered and educated.

Abdi İpekçi is, based on the monthly lease prices, the most expensive and classy street with prominent Turkish brands as well as world-known luxury retail stores such as Christian Louboutin, Louis Vuitton, Prada, Cartier, Dior, Gucci, Gianfranco Ferre, DKNY and many more.

Besides the shopping euphoria, Nişantaşı has become a well-known culture and art center. Moreover, its cafes and restaurants in the area, especially on MimKemal Öke and Atiye streets are luscious.

Picture of Bağdat Caddesi, Istanbul’s famous shopping street.
Bağdat Caddesi.
On the Asian side of the city and roughly parallel to the shore of the Marmara Sea, Bağdat Avenue is a rather green and glossy 14 km long high street. The first residential steps in the area were the luxurious wooden chalet mansions built after 1870’s. Some still exist and contribute to the wealthy look of the upper-scale residential area. As well as the shopping exuberance, Bağdat Avenue is famous for international and local cuisine restaurants, pubs and cafes.

Bagdat Avenue scored 83 out of 100 and became 4th (!) on a ranking list of the world’s most famous shopping streets made by a Paris-based market consulting company in 2012.

The criterias of the mystery shoppers were:

Appearance (cleanliness, lighting)
Welcome (staff greetings, courtesy, availability)
Atmosphere (garbage cans available, open space, clean pavement)
Contact with passers-by (friendliness, helpfulness to people passing through the store)
The outstanding line for shoppers is the 6 km long stretch with one-way traffic from Bostancı to Kızıltoprak. You can track down most of the shopping malls and fashion stores in the direction westward between Suadiye, Şaşkınbakkal, Erenköy and Caddebostan neighborhoods.

I recommend you to get to Bostancı and then walk back towards Kadıköy – in the direction of the traffic flow. You will easily spend a full day in the Bağdat Caddesi.

Picture of Forum Istanbul Shopping Center in Turkey.
Forum Istanbul. © Forum Istanbul
Whatever you may need, you can almost bet on it that you can find it in Forum Istanbul. The shopping center made its debut in 2009 and is built on an enormous area of 495.000 sq meters. About 8.000 sq meters of it is occupied by Turkey’s first gigantic aquarium Turkuazoo and the first ice museum, Magic Ice.

Picture of Galleria Shopping Center in Istanbul, Turkey.
Galleria. © Galleria
You have just left the airport upon arrival and there is an emergency. You need to do some shopping! Tell your taxi driver to take the seaside road because the place to be is Galleria, the very first shopping center in Istanbul.

In the 80’s Turkey faced a lot of social changes. The mastermind was the innovative Prime Minister Turgut Özal who recommended building such a shopping center since he was inspired by the shopping mall Houston Galleria in Houston, Texas, USA. Located on the seaside of the Ataköy suburb, Galleria was built on a covered area of 77.000 sq meters.

It has several elite stores, restaurants, movie halls, a bowling hall and an ice skating rink. Galleria was recognized as the world’s most outstanding mall in 1990 by the International Council of Shopping Centers (ICSC) for sophisticated blueprint design, rapid construction, and unique structural features.

Picture of Metrocity Shopping Center in Istanbul, Turkey.
Metrocity. © Metrocity
A four-storey shopping center housing 140 stores located in the finance district of Levent. Teflon coated fiberglass fabric was used for the roof construction, which brightens up the shopping pleasure.

Metrocity is directly connected to the M2 metro line.

In order to make the most use of the valuable land, most of the recently built shopping centers are combined with at least two towers for residencial and/or office purposes. Therefore, most of them have this majestic look.